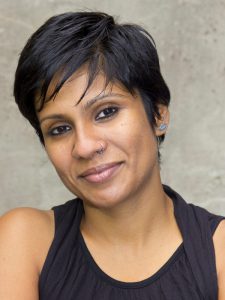 Bix Gabriel is a writer, teacher of creative writing, editor at The Offing magazine, 2021 Periplus Fellow, co-founder of TakeTwo Services, occasional Tweeter, and seeker of the perfect jalebi.

She has a M.F.A in fiction from Indiana University-Bloomington, and her writing appears in the anthology A Map is Only One Story, on Longleaf Review, Catapult, Guernica, and Electric Literature, among others. Her debut novel, Archives of Amnesia, was a finalist for the 2021 PEN Bellwether Prize for Socially Engaged Fiction.

She was born in Hyderabad, India, and lives in Queens, NY.